Journey of the Anonymous – Angel of Jakarta 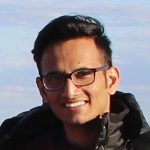 The girl playing around me had only one small card, possibly from some bin. She sat down every minute to scratch it with a white stone and then put it back in her toybox, which also contained some caram coins. Her most exciting game was to take all of them out – four green, one yellow and one white – and put them back by grouping their colours.  And she laughs. Such a small yet joyful world; no complaints, no tears, life seems to be too short. I leaned on a handrail over the bridge, yes, with black water flowing just beneath and kept on watching her. She was singing or may have been talking to herself with a side look to me, to make sure she was making me happy and a smile to show her broken front teeth, if I wasn’t smiling already.

Drowning in the well of thoughts, my mind started to stroll around the possible ways to make her happier.  I wanted to gift her something that I knew she would know the value of.  Not money, as money never solves anything and only travels from one hand to the other and exaggerates what is already existing! After a while, an idea was born from the breeze and transformed the issue to a new form: if I try to buy this sparked illusory gift for her, she might have already left by the time I came back, given there were no stores nearby. I did not know how these streets work as streets are all different, unlike the towns which all look the same around the world. Each street carries its own soul. I left it to nature. I want to gift her, that’s it!

The walk was longer than I expected, a few streets, pedestrian flyovers and it took a while before I came back. The signs were moderate. The staff were speaking English to assist me. I thought I was closer, but I was getting further away. By the time I came back with the painting book to nourish her gifted fantasy of colors in her, the footpath on the bridge was filled by her absence, she had evanesced. I kept on walking through the possible ways the little angel of the street might have flown. No sign. ‘Ok. Let’s do one more circle, sometimes nature tests the desperate.’

A full square cut of fifteen minutes’ walk. Yes! There she was! But now with a small pot of noodles in her hand and biting a big spoon, big compared to her size. The game had evolved a little further: one spoon of soup and two strikes on her card with the stone. Repeat. And I watched her for a couple of minutes before calling her close to me. She came very close , closer than I expected and I opened the bag to present the coloring book and crayons. I sat with her on a Martian concrete block to start the new game; making the colorless pages colorful. 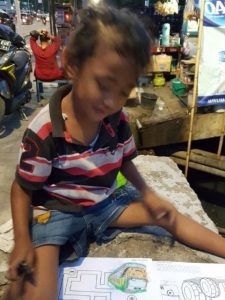 Her eyes became twice brighter each time she touched a new crayon and they opened wide enough to let her finish the first page in less than three minutes. That’s when I remembered the saying ‘when you pour water to a dry throat, you should feed sip by sip.’ I turned the first page back and painted with her all the missing spots. She was a great follower and a quick learner! I had to tell her only once to get a box filled with the color I wanted. The next page took at least 15 minutes, with the 10 year old filling every detail with a new color she picked, winning over my choice.

She started rhyming some songs for me by the time we reached the third page and eventually got fully dissolved into the rainbow colors. By the time she started to color the bus on the fourth page, her mom and elder brother joined us with competitive smiles and it was time for me to say goodbye to my little angel and resume my walks.

I inched along the handrails of the bridge for a few meters and took a turn leaning back on the steel post. The sun was brighter, both over my head and deep inside my heart. May be, the inner bliss is a reflection when we transcend from our own lives and start to give others happiness. In a few minutes, she ran to me asking something which I had absolutely zero clue of. She was yet to learn that my inability to speak her language was irrelevant, as we did not need any language other than the universal language of humanity. After three failed attempts, she lost her patience and laughed while running back to her mom, who was just behind her by then.

There was a new member of their family, a golden kitty patrolling them. The little angle’s hug immediately transformed her to a pet cat, which started to crawl along the floor, starving for more cuddles. I waved at her in Indonesian and they both waved me back in English, with a bright smile, the brightest smile I have ever seen!

(A slice from the unique travel diaries of an anonymous solo- wanderer– To be published in 2021, covering the first five nations. Stay tuned @ devscrapnotes.blogspot.com for updates.

Any feedbacks most welcomed at scriptofveins@gmail.com)